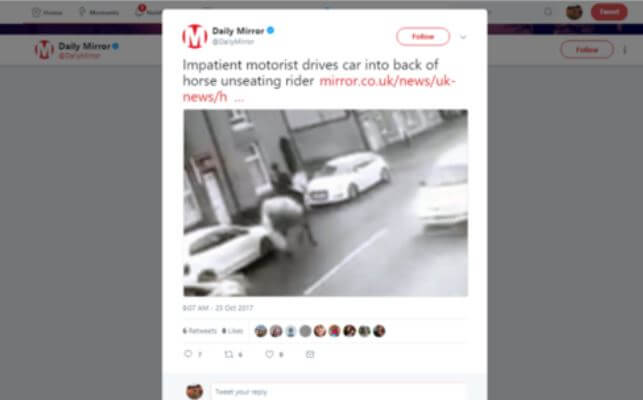 A horse was left requiring major surgery this week after a woman used her car as a battering ram to plough through the animal and its rider in Greater Manchester on Tuesday.

The incident happened in broad daylight on a built up residential road in Castleton. Images show the lady in the car try to overtake the horse through a very narrow gap, after growing tired of waiting behind the animal. The move ended in catastrophic fashion that saw the rider fly off her saddle, hitting the pavement as her injured horse bolted down the street. The driver reportedly drove off after this without hesitation or care for the damage she’d caused.

The incident proved to be even more serious than originally thought, as the horse required urgent surgery from nasty collision injuries.

Further updates on the horse’s condition are yet to be confirmed.

Images posted on Facebook show the moment clearly, with pictures of the vehicle driving extremely close to the back of the horse, followed by viewing of the horse bolting down the road in fright, as the driver makes her swift getaway. The images sparked furious attention on social media and were published on the Daily Mirror’s website.

Drivers like this refuse to let riders feel safe when using roads. It’s completely disheartening that we can never be truly comfortable with sharing the UK’s roads.